Matalynn Lee Tsosie showed up at the Indian Health Service hospital in Gallup, N.M., one day in April feeling poorly and having trouble breathing. When her coronavirus test came back positive, the hospital gave her a prescription for an inhaler, an oxygen tank and orders to go home and rest.

Three days later Ms. Tsosie, a 40-year-old secretary for the local school system, was back at the hospital, this time in dire condition. But the hospital was ill-equipped to handle severe coronavirus cases. She was transferred to a hospital two hours away in Albuquerque, where she died alone after doctors tried to take her off a ventilator.

“My thought from the beginning was that it was a slow response,” said her sister, Kirsten Tsosie, fighting back tears. “I think a lot of lives could have been saved if we had a quick response to it.”

Long before the coronavirus, the Indian Health Service, the government program that provides health care to the 2.2 million members of the nation’s tribal communities, was plagued by shortages of funding and supplies, a lack of doctors and nurses, too few hospital beds and aging facilities.

Now the pandemic has exposed those weaknesses as never before, contributing to the disproportionally high infection and death rates among Native Americans and fueling new anger about what critics say has been decades of neglect from Congress and successive administrations in Washington.

Hospitals waited months for protective equipment, some of which ended up being expired, and had far too few beds and ventilators to handle the flood of Covid-19 patients. The agency failed to tailor health guidance to the reality of life on poverty-wracked reservations and did little to collect comprehensive data on hospitalizations, death rates and testing to help tribes spot outbreaks and respond.

The virus has killed more than 500 people in the Navajo Nation in the southwest United States, giving it a death rate higher than New York, Florida and Texas. It has infected more than 10 percent of the small tribe of Choctaw Indians in Mississippi.

A New York Times analysis found that the coronavirus positivity rate for Indian Health Service patients in Navajo Nation and the Phoenix area was nearly 20 percent from the start of the pandemic through July, compared with 7 percent nationally during the same period. It is now down to about 14 percent in both areas, nearly three times higher than the current nationwide rate. 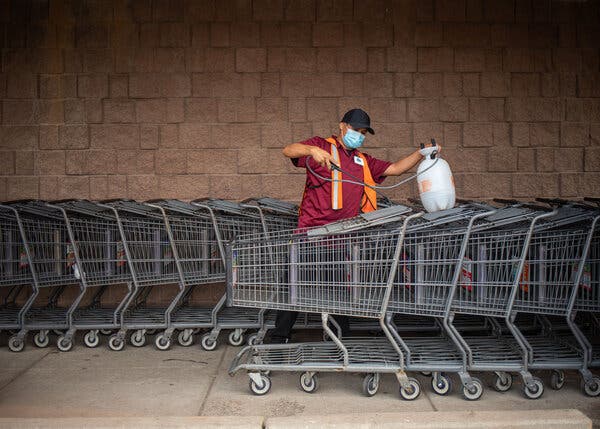 The systematic weaknesses in the health system forced tribal officials to take matters into their own hands, spending millions of dollars of tribal money to bolster the response and enacting curfews and other steps to enforce social distancing. The Oglala Sioux and Cheyenne River Sioux tribes in South Dakota, among others, tried to head off the spread by limiting entry into their reservations.

“If we would have waited for the federal government’s help, our deaths could have been in the thousands,” said Mike Sixkiller, a city coronavirus coordinator in Tuba City, Ariz., where the virus first entered the Navajo Nation.

The doctors and nurses at the federally run hospital in Tuba City pleaded on social media for protective medical equipment, hand sanitizer and other supplies while waiting for assistance from Washington. City officials took the same approach and began receiving donations from across the country.

In states with Indian Health Service hospitals, the death rates for preventable diseases — like alcohol-related illnesses, diabetes and liver disease — are three to five times higher for Native Americans, who largely rely on those hospitals, than for other races combined.

So the virus hit the Indian Health Service and the people it is supposed to serve like a freight train.

“It started as a complete nightmare here,” said Frank Armao, the chief medical officer at the Winslow Indian Health Care Center in Arizona.

He said the hospital struggled to obtain protective equipment for its medical workers during the initial surge. The hospital relied heavily on donations from outside groups and nurses stitching together masks as patients began to flood in.

“It was absolute panic at first; everyone assumed N95s were going to be forthcoming, and pretty quickly we realized that, holy cow, the tribe doesn’t have the stockpiles they were supposed to have,” Mr. Armao said.

He said 32 patients died at the hospital. Most were the tribe’s older members, who were in their 70s and had underlying conditions like diabetes and heart disease. Many critically ill patients had to be transferred to hospitals in Arizona and New Mexico because the health care system was not equipped to treat them.

Many of the service’s hospitals lack the medical expertise and equipment to treat patients with severe illness. The vacancy rate in the health system for doctors in Navajo Nation is more than 25 percent; for nurses, it is 40 percent.

Based in Rockville, Md., the Indian Health Service, often referred to as I.H.S., was created to carry out the government’s treaty obligation to provide health care services to eligible American Indians and Alaskan Natives. The tribes agreed to exchange land and natural resources for health care and other services from the U.S. government as part of the Fort Laramie Treaty of 1868.

The agency, which has 15,170 employees, most of whom work in the hospitals and clinics, was without permanent leadership until a few months into the pandemic. Rear Adm. Michael D. Weahkee, a member of the Zuni Tribe, was confirmed by the Senate in April after leading the agency on an interim basis since 2015. Mr. Weahkee declined to comment for this article.

The system consists of 26 hospitals, 56 health centers and 32 health stations. The hospitals range in size from four beds to 133. The Indian Health Service is broken into a dozen service regions across the country, each one serving tribes living in that area.

The pandemic forced the agency to scramble.

“We can get you N95s (they’re expired, but the C.D.C. and I.H.S. say that they’re still OK to use),” an I.H.S. official wrote in an email to tribal officials looking for protective medical equipment.

“I feel like it is common practice that we are always getting the bottom of the barrel, the leftover,” said Esther Lucero, the chief executive officer of the Seattle Indian Health Board. At one point, she requested more coronavirus tests and instead received body bags.

Even before the pandemic, health problems were rampant in communities served by the agency, meaning many people had underlying conditions that would complicate treatment of the virus. And the poverty on many reservations created an additional problem.

At the Navajo Nation, which includes parts of Arizona, New Mexico and Utah, many people live in homes without electricity, and a third of the population does not have running water. Many units house more than one family, and it is not uncommon for grandparents, parents and grandchildren to live under one roof.

These settings made it difficult to follow the main guidance from the Centers for Disease Control and Prevention to stop the spread of the virus: frequent hand-washing, social distancing and isolation in case of infection.

Many residents have spent the past months rationing a limited supply of water, prioritizing drinking water for themselves and livestock over hand washing. That also means more than a third of residents travel to the reservation’s most populous cities and nearby border towns to buy water in bulk, potentially exposing themselves and others to the virus.

“We’re a sparsely populated area, so people have to travel miles to get their health care,” said Jonathan Nez, the president of the Navajo Nation. “It’s especially difficult if you don’t have electricity or even water.”

But those needs were not reflected in the health service’s initial response.

The small town of Kayenta, Ariz., was among the first on the reservation to be hit by the pandemic. Ruth White, a registered nurse with the Navajo Public Health Nursing Program, said patients looking to be tested or seeking treatment were being turned away if they did not have severe symptoms. The public health nurses would try to track down these patients and track their symptoms by phone. And at times, nurses pooled together money to provide the patients with masks, food and medication while they quarantined.

But sometimes, it wasn’t enough, and patients died waiting for medical treatment that never came.

“They developed relationships, and as the patients got sicker and sicker our staff would feel it, too,” Ms. White said, wiping tears from her face. “Our staff felt like it was our fault.”

Philana Brown, a public health nurse at the hospital in Kayenta, dealt with the virus personally. Ms. Brown said that her brother’s condition worsened after initially experiencing headaches, and that he collapsed and died just as the ambulance arrived at his home.

Ms. Brown later tested positive for the virus but refused to be airlifted out, fearing she might not make it back. Instead, she spent weeks in an isolation room, sometimes with other patients.

The Navajo Nation is one of I.H.S.’s 12 service regions. The federal agency runs 14 health care facilities on the reservation. There are 222 hospital beds available to the reservation’s more than 170,000 residents. (The agency says the region also serves another 74,000 Native Americans who live off the reservation.) That ratio of hospital beds to population is about a third of the figure for the general population in the United States.

“We only have a handful of health facilities, and some of them don’t even have beds anymore,” Mr. Nez said. “For a nation that is the size of West Virginia to have only a handful of hospitals is unacceptable.”

The agency’s defenders say it has always been woefully underfunded. They say Congress and previous presidential administrations should shoulder just as much blame as President Trump and the agency’s management for its current shortcomings.

“I see members of Congress eager to point the finger at Indian Health Service, and they should be pointing the finger at themselves,” said Dr. Donald Warne, the director of the Indians Into Medicine program at the University of North Dakota School of Medicine and Health Sciences.

In 2017, the Indian Health Service spent $3,332 per patient, according to a report by the National Congress of American Indians. By comparison, Medicare spent $12,829 per patient that year, and Medicaid spent $7,789 per patient, the report said.

After a scandal in 2014 uncovered appalling patient care issues at the hospitals of the Department of Veterans Affairs, Congress and the Obama administration spent billions of dollars to shorten wait times, fill provider gaps and upgrade the medical facilities.

Native Americans can only wish that sense of urgency be afforded to the government-run hospitals that are supposed to serve them.

Dr. Jill Jim, the executive director of the Navajo Department of Health, said officials in the Navajo Nation area of the Indian Health Service responded to the best of their abilities despite a lack of resources and expertise at the headquarters level.

“I don’t think Indian Health Service was generally positioned to respond to a pandemic nationally,” she said. “They don’t have a public emergency office, they don’t have dedicated staff that are hired for public health emergencies.”